I am officially the world's worst mother 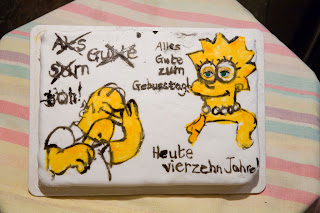 Yes, I am. Yesterday, younger son went off on school trip to Cologne at 6am. Yes, that's right 6am. We were just about awake. And then we went back to bed.


Woke at 10am. Crawled downstairs. Phone rang. It was school. Could Mr N ring us back re younger son who was being travel sick and they wanted to buy him some travel sickness pills. Yes, of course he could.

Phone rang. Mr N less than happy. Younger son had been sick five times between Bristol and Dover, first time less than half an hour after they'd left school. AND HE HAD NO TRAVEL SICKNESS MEDICATION.


This was bad for him, bad for the staff and bad for the other kids who were sitting near him. Could they buy him some stuff? AND I AM CLEARLY A BAD MOTHER.


By now, I realise I am the world's worst mum. I have sent my son off on a trip (which included a ferry crossing), having ticked the "I suffer from travel sickness" box and I haven't given him anything to counteract this. What was I thinking of?

Well, to be honest, quite a lot of things. Firstly I spent part of the day before making a pair of comfy joggers which said son was hugely appreciative of. And then, I made him a birthday cake. This actually turned out to be the crappest birthday cake I have ever made, by quite a long shot, and at the risk of being severely ridiculed I post a picture here:


Well, at least I tried to, but all I've managed to do is post said awful picture at the top of this blog, and to be honest, that's probably scared most readers off. I need to get on top of this posting lark, and sooner rather than later.

And secondly - I post this in mitigation (yes, I know, there are no excuses) but .... said son wasn't at all sick on coaches going to year 5 camp, year 6 camp, year 7 camp. Nor on the train going to Manchester for a tournament. He's only ever sick in the car going to Grandma's (40 minutes down the motorway). And, to be honest, he doesn't ever go anywhere else (bed - Xbox- bed).

And also I thought that as they were going at 6am in the morning, and he'd asked to take a pillow with him, that there was a strong chance that he'd just be asleep anyway.

And I have been replying to their Twitters - yes, I even signed up to Twitter for this trip - but still I know - I AM A BAD MOTHER.
Posted by allotmentqueen at 21:45