On travelling - part one

Us oldies have had a little adventure recently.  We've been to Heathrow Airport.  Twice.  I've never been there before although OH has many times in his days as a film sound recordist.  Things have changed though.

On 29th December 2015 DD was due to fly to New Zealand for the holiday of a lifetime.  She was going with the 2014 Downhill Mountain Biking champion and BBC Wales Sportsperson of the Year (MC) who has been a good friend of hers for a long time.

MC was taking the bikes as she was going via Essex so that her friend could take the van and not leave it (expensively) at Heathrow.  We were taking DD with her hand luggage and a few things which needed to be packed in the bike bag/box.

At this point I should say that DD was taking 2 bikes and MC was taking 3.  As you do.  Here's a picture of their luggage when they finally arrived at Auckland: 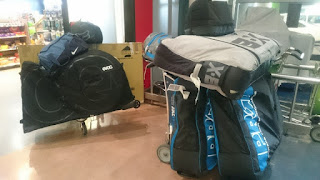 DD's is on the left.  Just think in terms of what a normal airport trolley for a family looks like.
So we arrive at Heathrow a good 2½ hours before departure because we know it will take time to book all the luggage in.
Wait 15 mins for MC to turn up with the bikes.  OH has gone off to park in neighbouring suburbia so that we're not paying a fortune for car parks.

DD and I then spend the next 45 minutes packing and repacking the bag/box.  Both are overweight (ie will cost extra).  Re-pack box so that it's within weight.﻿  Check bag.  Now over maximum permitted weight.  "Right", I say, "what can you not take that you don't really need."  First off, she takes off the lightweight shoes she's wearing and replaces them with the 'clip shoes' which are a lot heavier.  Then she removes a set of pedals as she will only be using one set of pedals at a time.  She removes a rucksack that is containing clothes as she already has another rucksack.  Still over limit.  So then she removes the leg hair removal cream (do you really need that?).  Finally the bag is within the limits.
Go to check-on desk.  They're not actually going to weigh anything because there is a bar across and neither box nor bag will fit beneath it.  So they can't weigh them.  Girl on check-in desk is fine with that.  So what have we spent the last 45 minutes doing????
Then comes the final blow (and this is after months' planning and quite a lot of pounds spent):  "The system won't let me issue a boarding pass because you haven't got a US visa".  But she's just transit-ing via LA and will be airside the whole time.  No, you need a visa.  I am ageing visibly.
I now have visions of spending hours at the American embassy in London trying to get a visa.  And who knows how much re-booking the flight is going to cost.
All the while OH is trying to phone me to find out how much longer this is going to take, because (let's face it) he's completely in the dark as to what's going on.  His phone won't connect to me, and I can't phone him back.  We end up corresponding via Eldest Son (in Bristol) who somehow has a connection to the both of us.
"It's okay", says airport desk girl.  "You just need to go onto 'ESTA' on your phone and you can get a travel permit.  It'll cost you 14 dollars but they'll do it almost straightaway."
So DD goes off to get this ESTA thing and I try and maintain a  place in the queue whilst she does it.
Fifteen minutes (or indeed, half a lifetime) later she comes back with the requisite authorisation.  By now, I've let half the plane take my place in the queue.
Yes!!!!!
Now we just need to find a nice baggage handler to take her box and her bag.  This is so the easy bit!
Finally I can kiss her goodbye and hope she has a lovely time.  By now, any tears will be tears of relief that she has finally gone, rather than tears that my baby is going to the other side of the world!
Posted by allotmentqueen at 23:40